​​The audio tour of the Brick Tavern Museum is available on your smart phone as an app. Simply download the UNIGUIDE app from the Google Store and look for our tour as "Brick Tavern."

The Schuyler County Historical Society depends on the support of individuals and businesses for our mission to preserve the history of Schuyler County and share it through events, exhibits and programs for the community.

The Society is a 501(c)(3) non-profit  organization.  We will send a donation receipt for your records and a heartfelt thank you in response.

or donate by credit card through PayPal.​ 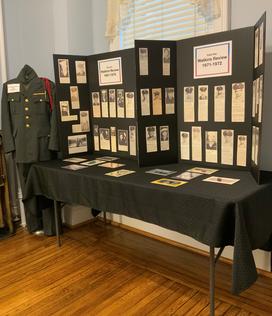 A new special exhibit presented by the Schuyler County Historical Society honors county residents’ involvement in the Vietnam War, both military and civilian.

The exhibit opens on Friday, Jan. 27, in the Gallery of the Brick Tavern Museum in Montour Falls. The opening date marks the 50th anniversary of the signing of the Paris Peace Accords, which ended the prolonged war.

The community was invited to participate in creating the exhibit, providing a focus on individuals who served.

According to the Schuyler County Veterans Services Agency, 1,389 Schuyler men and women served in the U.S. armed forces during the Vietnam Era, which is considered to be August 5, 1964, through May 7, 1975.

Two months after the signing of the Paris Peace Accords, on March 29, the last American combat troops left South Vietnam. That date has been designated as National Vietnam War Veterans Day.

The Historical Society will host an exhibit reception on Wednesday, March 29. The reception will be from 4-6 p.m. and is open to the public.

The exhibit, “The Vietnam War, Honoring Those Who Served,” will be on display at the Brick Tavern Museum through the end of May.

The Brick Tavern Museum is located at 108 N. Catharine St./Route 14, Montour Falls. Admission is free. Hours are Tuesday, Wednesday and Friday 10 a.m. to 4 p.m. and Thursday 2-8 p.m. Museum exhibits and all operations of the Schuyler County Historical Society are supported by a Tourism Assistance Program grant administered by the Watkins Glen Area Chamber of Commerce.

A benefit of membership is receiving The Vista, a quarterly newsletter about the activities and events of the Schuyler County Historical Society.

Back Issues of The Vista 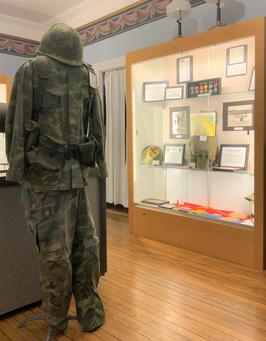