​​​​
Our museums and operations are partially funded by a grant authorized by the Schuyler County Legislature and administered by the Watkins Glen Area Chamber of Commerce.

Donations from the public also help us fulfill our mission to preserve and share the history of Schuyler County. Donations to the Schuyler County Historical Society, a 501(c)(3) non-profit organization, are tax-deductible and greatly appreciated!

Or make a donation by credit card or

through PayPal. We will send a donation receipt

for your records and a heartfelt thank-you in response.

We are part of Amazon Smile.  Go to www.smile.amazon.com

Welcome to the Schuyler County Historical Society. We are located in Montour Falls, Schuyler County, New York, just south of Watkins Glen and Seneca Lake in the Finger Lakes Region. The Society maintains three properties and is headquartered at the Brick Tavern Museum, a large brick Federal-style building built in 1828 and listed on the National Register of Historic Places. The Brick Tavern Museum and the adjacent Wickham Rural Life Center have exhibits relating to Schuyler County’s rich history. Our collections include artifacts, books and documents concerning the county's people and events, valuable to genealogists and researchers. The Lee School Museum, a one-room school on Route 14 south of the Brick Tavern Museum, also is on the National Register of Historic Places. Admission to all museums is free, but donations are welcome. A fee is charged non-members to use our research resources. 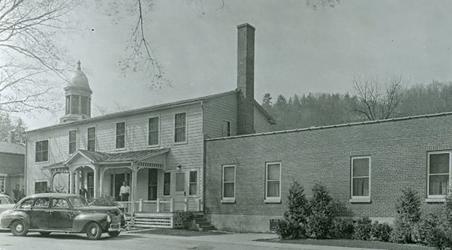 The Schuyler County Historical Society is supported in part by a TAP grant administered by the Watkins Glen Area Chamber of Commerce.

Winter weather policy: The museums are closed if  Odessa-Montour Central schools are closed.

The 29th governor of New York State was David Bennett Hill. He was born in Havana (the prior name of Montour Falls) in 1843. He served two terms, from 1885 through 1892. He died in 1910 and is buried in Montour Falls. The first execution by the electric chair took place during his term.

We reopened on July 1!

The Brick Tavern Museum and Wickham Rural Life Center reopened on Wednesday, July 1. The facilities, located at 108 N. Catharine St./Route 14, have regular hours and are using New York’s Phase 4 health and safety guidelines. All visitors are required to wear masks, and groups are limited to six. Researchers are required to make an appointment to use the Brick Tavern Museum library. Visitors, volunteers and staff are asked to use a sign-in log. Due to reconstruction of Route 14 through Montour Falls, street parking is not available. Visitors should use the north driveway and park behind the building. The Brick Tavern Museum’s special exhibit honoring the 100th anniversary of Schuyler Hospital remains on display through Aug. 15. The next special exhibit will open Sept. 2 to honor Schuyler County residents who had a military or civilian role in World War II. Hours at the Brick Tavern Museum and Wickham Rural Life Center are Tuesday, Wednesday and Friday 10 a.m. to 4 p.m.; Thursday 2-8 p.m.; and Saturday 10 a.m. to 2 p.m. Admission is free. Visitors and researchers are encouraged to call the Historical Society at (607) 535-9741 or email director@schuylerhistory.org with questions.

​Shepard Relief Hospital received its charter in 1920 and opened for the first patient in 1921. The location on Schuyler Avenue in Montour Falls was the forerunner to today's Schuyler Hospital on the west hill overlooking the village. The photo shows Shepard Relief in the 1930s. The Brick Tavern Museum's special exhibit about 100 Years of Hospital Care in Schuyler County will be on display through Aug. 15.